Evelyne Shannon Drouin is passionate about fashion, but not just any kind. The clothing she sells in her beautiful store is made in . Although each item in the collections of 17 brands offers its own unique style, each shares the same attributes. The material is natural; the item must be highly original and a Canadian-made creation. In fact, she sells brands from Quebec, BC and Ontario.

“We go for distinct styles. Most of our clothings is made from natural fibres. This feels lovely against the skin. We have classic cuts that fit, flatter and enhance the client’s silhouette. There is something for every body type. We want our clients to come and shop here for one-of-a kind clothes and accessories    that make them feel good and lifts their mood.” 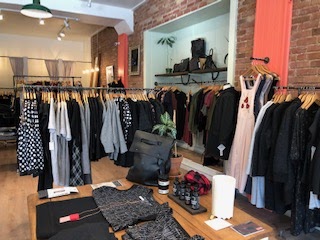 Walking into her store, I felt a cocoon of calm settling over me. The notably distinct clothing designs had their own natural allure. The classic, the dainty and the different delighted my eye and had its ‘wow’ effect’ on me.  I looked forward to wearing a creation that was completely made in and cut locally with care and love

“People should know that our clothes do not come from any sweat shop. Nothing is made overseas. Everything is ethically and locally made and most items are made from natural fibers.”

Dynamic Designers
I discovered that natural neutral colours are key to sophistication and subtlety.
I loved the long-sleeved dress shirt sporting gentle blue stripes. Then again, a colourful blouse and a polka dot number beckoned me. 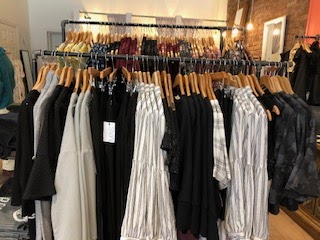 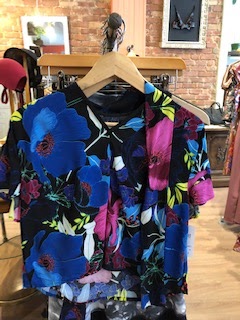 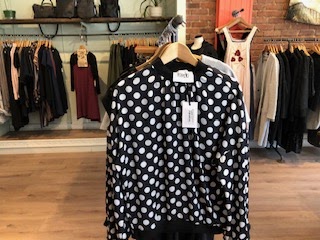 Everything is unique, and because of the high standards of quality, the collections are timeless keepers. Whether it be a pant suit, a print dress or a stand-out top, you’ll discover this store has widespread product. Evelyne coyly showcased some items. She herself was wearing a  pant suit designed by Birds of North.


Cards and Bibs
Moving to the left area of the boutique, my eye caught a catchy corner of greeting cards. You’ll find some whimsical post cards with wonderful phrases on the front – each referring to different situations. Of course everything is hand-made in the maple-leaf nation. 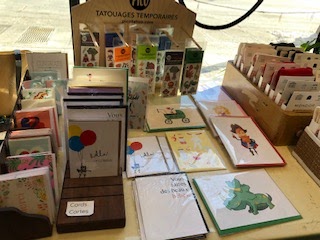 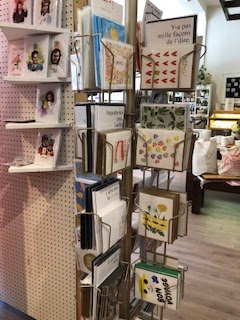 Take a look at the cute baby bibs and kiddie clothes near the cards. 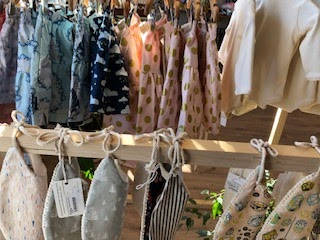 Talk about style for toddlers! 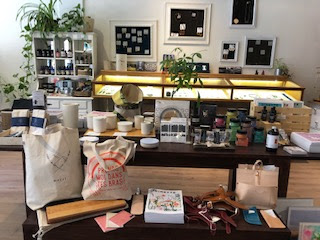 Foodie and Spice Connoisseurs
Brimming in gifts, the store has widespread product appeal. There’s a variety of bitters within the collection of mixology. Syrups and La Pincée – a line of mixed spices, peppers and fresh ground herbs in single jars certainly make an original gift. Also on the foodie table are attractive containers for butter, garlic, salt and sundry containers.  Foodie accessories abound here.

Enjoy meandering and discovering the pot-pourri of Canadian-made goodie 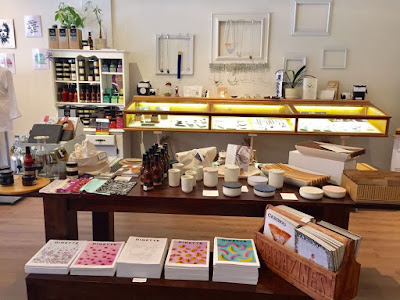 How about adding colourful comfort to your home? The throws and pillows add variety pop, not to mention snooze comfort. 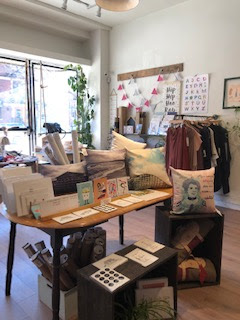 Jewellery… Simple and stunning
Finally, the extraordinary jewellery is beautiful to behold, it has a quiet dazzle factor. The glittering pair of gold quartz earrings yanked my chain. Long earrings with slither thin lace had its own exotica, as did the wonderful wood pendants of the necklaces. Organic and original, they seemed to embody Evelyne’s philosophy of natural simplicity. These treasures are also framed on the wall, so look up and  down at the showcase to find what suits you.


Evelyne, a Woman of Excellence
Named after her beloved grandmother from which she herself got her name, Evelyne launched her store in mid-2016. Her experience and connections in the fashion world came from working in the wholesale end of things, even having her own agency, called Bold. Grouping her favourite designers from which she selected 17 compelling collections, she launched Evelyne widespread appeal.

A woman devoted to others, Evelyne offers private consultations on choosing what’s right for you. Clothes make the woman here, and the clothing is a treat for us. But Evelyne has a few surprises up her own sleeve. She’s an avid cook and has a bold hobby: boxing. Will wonders never cease? Not as long as Evelyne and her boutique are here.

Posted by nancy snipper at 12:13 PM No comments:

Email ThisBlogThis!Share to TwitterShare to FacebookShare to Pinterest
Labels: FASHION

CHORAL VOICES CONVERGE ON PURCELL’S MANY FACES AS ARION EXPRESSES IT ALL IMMACULATELY.


The moment Andrew McAnerney’s choir began to sing with Arion Baroque Orchestra’s playing, the world stood still. The choir’s sublime tonal harmony cast a continual spell on us all as Mr. McAnerney gently wafted his baton, conducting the sixteen choral members of his choir, Studio de Musique Ancienne de Montréal of which he is the artistic director.
Opening the 2019 season with an all-Purcell program, the concert featured three of the 17th-century composer’s solemn anthems which were played at funerals during the English composer’s life. The first one we heard, Thou Knowest Lord the Secret of our Hearts was expressly written for the composer’s own funeral, and was indeed played at his burial in 1695.
Hear my Prayer, O Lord followed, and then came the memorable Jehova, quam multi sun hostes mei.  This almost modern-in-feel daring work was striking in its lyric and expression, as the amazing tenor, Nils Brown, sang with command the first part of the lyric. Then baritone, Normand Richard exclaimed like a call to arms, “Surge Surge Jehova…. “


The pair expressed this work’s Latin lyric with such intense conviction, we felt we were beginning to feel Purcell’s depth, not to mention, we immediately wanted to go out and relearn our Latin from school.
This third anthem focused on foes. It featured some vivid, even violent descriptions: “Strike all my enemies on the jaw, break the teeth of the wicked.” This, he implores the Lord to do. No mincing words here!
Purcell ‘s sacred music demands a perfect if not restrained balance of unified tonal vocals that highlight polyphonic passages. This was majestically achieved by the singers’ as they followed the direction of their sagacious choir master, Mr. McAnerney.
Versatility, melodic inventiveness and baroque fugues jumped from rhythmic lightness and alacrity to robust attacks such as in the Welcome to All the Pleasures – the final piece on this outstanding program characterized the composer’s musical ingenuity. Never a dull moment!

What a delight to hear Mme Stephanie Manias angelic soprano voice, and when it intertwined  in one part with soprano, Rebecca Dowd’s, stunning voice, we felt we had touched heaven. It was as if these two twittering song birds guided us there for just a brief moment.  Likewise, counter tenor, Nicholas Burns was hypnotic in his heart-felt mellifluous delivery – a striking comparison to Nils Brown’s dramatic delivery in this joyous work.

One must also mention that Claire Guimond’s Arion Baroque Orchestra made its own celestial instrumental voice heard both in Chaconne pour cordes et basse continue en sol mineur, Z.730, and also in the Overture of the Ode for the Celebration of Sainet Cécile.
Invigorating at times, lofty with lingering sweetness at other times,
Purcell work is brimming with colourful contrasts as heard in a minuet, jig, and air in the Ouverture et suite pour la piece Abdelazer or The Moor’s Revenge.
It was a matinee concert of divine music; it held up a highly polished mirror to Purcell’s many faces
One hopes Purcell who lived only 35 years is listening to his own music in Heaven.

MUCH TO DO ABOUT EVERYTHING FOR SEASON FINALE

One sure bet with Arion is the program never stints on choices and quantity. Illustrious guests offering world-class virtuoso playing is also a sure bet, such as witnessed during the matinee concert on May 5 inside Arion’s home turf (Bourgie Hall). Titled, A Little Night Music, the concert featured, violinist Enrico Onofri – a popular Arion guest favourite in his dual role as conductor and performer. His comfy rapport with Arion’s baroque string players is utterly pleasing.
Composers on the program included Biber, Barsanti, Vivaldi, Boccherini and Mozart. Each piece captured the goings-on of night life, especially in Boccherin’s La Musica notturna delle strade di Madrid. Instrumental suitability vividly set the scene for all kinds of various street life. The parade at the end with its final diminuendo was mesmerizing. So softly was the fade of instruments you could almost see the street musicians of the night disappearing in the distance.
Vivaldi’s Concerto in G minor was compelling as flutist Claire Guimond dialogued with violin and basse continue. The expressive performance spun a tapestry of breathtaking techniques, thereby conveying a variety of delicate and robust flavours - colorful music to evoke night-time surprises. This work had an almost avant-garde approach to instrumental roles. The largos and prestos offered exciting contrasts to one another – as did his Sinfonia tirée de la serenade.


All kinds of bowing and rhythms greeted our ears in almost every piece. The concert ended with Mozart’s Serenata nottura, K.239 for two violins, alto, bass, strings and kettledrums. Part-way through, one of maestro Onofri’s strings broke.  The unexpected happens when music of the night reaches the stars.


Posted by nancy snipper at 5:20 PM No comments: