at Montreal Museum of Fine Arts, May 2016 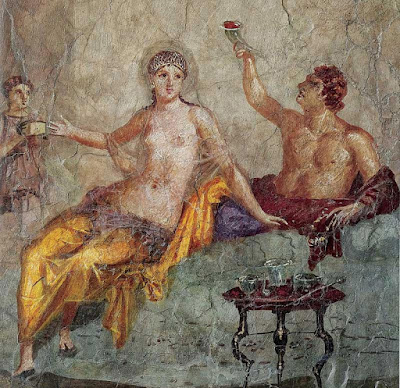 Vesuvius leaves its lasting legacy
On August 25th, 79 A.D. Mount Vesuvius erupted, (Pliny the Younger states two different  dates), the thriving port city of one of Italy’s most prosperous of Roman towns suffered an irreversible catastrophe, and along with this cultural mecca, Herculean and Stabiae.
The exhibit sets the tone immediately. Before entering the first of nine rooms, a black and white still in a projected image of the summit has its moving element; spewing smoke appears. A far more dramatic display of events reiterates this scene on a large scale that clocks in the four eruptions over a 24-hour period – the last of which is the final Tsunami-like covering of the entire town. This film, with some sound effects, mesmerizes viewers; and most would only recall this as the story of Pompeii, had not the other eight rooms brought to life the exuberant daily life and artistic zenith of the town and its inhabitants.
How clever that the exhibit builds up the bustling, dynamic reality that resonated within Pompeii’s walls! Its houses, shops, outdoor theatres, markets and more are brought to life; there are even background sounds that vividly enhance the visual aspects in the 220 artifacts that viewers can appreciate as they travel back in time.
Historical information is outlined regarding Roman rule and Pompeii’s subsequent uprising against the colonizing yoke that failed. An earthquake in 62 A.D. did nothing to shake the spirited people of Pompeii; it took 17 years to rebuild most of their beloved town. Little did they suspect nor surmise what would soon ensue.
One of the most telling examples of the people was the amazing amount of bakeries – 40 in all – that sprung up everywhere. Some houses even sold bread from the open door. Paintings depict this aspect of food, but ominously displayed near portable kilns, stoves, cooking utensils and more is a half-round loaf of carbonized bread.
Weights in iron and brass, oil lamps, coins dating from 41 to 70 A.D. are on display. Gold, silver and brass constitute their material. Carpenter tools fascinate as do the plumbing outlet faucets and more. Aged with patina, I thought these were remarkably telling of the city’s sophistication in taking care of hygiene and water.
I saw vintage raw axe heads, rusted nails and strange vertical measuring instruments. Amidst the major statues in marble found in various indoor gardens, tables and ornaments in glass, I beheld a dozen pieces of gold jewelry that dazzled in design, brightness and colour.
The four distinct stages of painting, including the masonry technique and trempe d’oeil, a plethora of wall panels and paintings and many scenes in relief along with tiny lares – gods in bronze housed on a shelf as protectors. Details in their art astound; they are priceless pieces of antiquity.
Tessserae – mosaic pieces that are assembled in figurative art, even a strigil, gladiator armour used in battle and more converge to show the diverse activities that travel the gamut from art to fighting – even dice games.
I was not persuaded that each piece was the original – especially in the perfectly smooth totally intact marble pieces, along with the frescoes that were obviously repaired; they were in too good condition to accept as untouched by restorers – all which should have been clarified in writing on the relevant plaque – along with the dates and provenance of many items were lacking. The audio guide surely explained more about each piece, but gallery exhibits usually provide vital written information to the viewer.
Finally, the second last room showed a film and several figures cast in positions of their last breath was unforgettably moving. Thanks to Giuseppe Fiorelli who carefully retrieved many of the dead, pulverized in ash and pumice, 1000 bodies of the 20,000 once very alive inhabitants have been recovered. He was able to get them out using a specific technique, employing casting, the human tragedy lives before our eyes. Overall, this exhibit is appealing, yet I would have liked more explanations of the making of a fresco and the repairing of so many pieces in the lab overseen by Professor Stefano Vanacore, director of the restoration.

Posted by nancy snipper at 8:05 AM

Email ThisBlogThis!Share to TwitterShare to FacebookShare to Pinterest
Labels: MUSEUMS AND GALLERIES