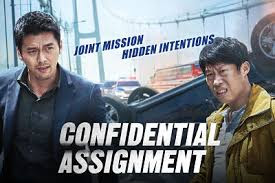 North Korean detective Cheol-ryung is guarding a Pyongyang laboratory. Cha, his one-time superior and his gang of thugs steal plates for printing counterfeit US dollars. To get the goods, Cha invades the lab, but not without brutally killing workers there, including Cheol-ryung’s wife.
Cheol-rung  is ordered to go to South Korea to get the plates back.  But he's also personally motivated to get the killer,; after all, the thug killed his wife. He’s totally dedicated to his country, but is paired with Kang, a policeman who certainly does not feel the same way. While Cheol-ryung is tight lipped about the operation, and Kang is passionately curious and caring, the latter is left in the dark as to why his North Korean partner is really here. Is it really to find a murderer, or is it for something else? 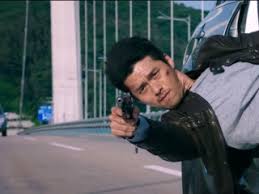 The action is super, the comic scenes fetching and ironically - often touching. The plot is brilliant. I loved the fact that North Korea has its own unusual twist: the hero  is from there.
In the end, politics falls to the wind as both men are able to embrace one another and soften their own hard-lined thoughts about each other. This is a must-see entertaining winner with some political themes embedded in the story which are handled in humorous way, bolstered with snappy sparring between the two men. The chemistry between the two characters are great, mainly because their contrasting personalities are wonderfully exploited. There’s never a  lull in this ingenious script. It was in this year’s Official Selection in Hawaii’s International Film Festival.  Shown at this year's Fantasia Festival, it won best film.
Posted by nancy snipper at 9:42 AM