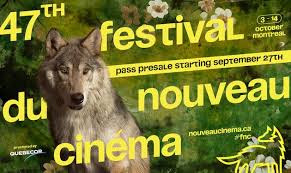 THE AVANT-GARDE, NEVER-BEFORE SEEN-ON-SCREEN PHENONEMA, TECHNOLOGY  TO ENGAGE IN; EXTRAORDINARY PEOPLE – FAMOUS AND FORGOTTEN,  IDENTITIES IN TORMENT TREADING IN LANDSCAPES OF  URBAN MADNESS ANDFORLORN WILDERNESS.  LOYALTIES, LOVE, VENGEANCE AND MORE COLLIDE IN AN AMAZING MYRIAD OF GENRES, THEMES AND CINEMATIC STYLES. STRANGE, POWERFUL AND ALWAYS DIFFERENT, IT’S A FILM FESTIVAL LIKE NONE OTHER. INCLUSIVE FOR ALL AGES OF FILM GOERS – FAMILIES  AND CHILDREN FIND IT ALL HERE. THE NEW AND THE OLD COME ALIVE IN ANIMATION, EXPERIMENTATION GUTSY GROUND-BREAKING BRILLIANCE TO SATISY ALL.

FNC runs from October 3 -14. For information, including tickets, venues and schedules, visit FNC's website is www.nouveaucinema.ca

IF BEALE STREET COULD TALK (Directed by Barry Jenkins)**** 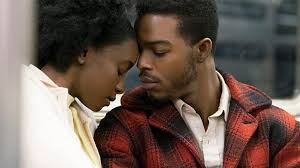 Tish and Fonny are two young Afro-Americans whose love began during childhood. They never ever waver from their commitment to one another. Though not marred, Tish is expecting. Sadly Fonny is accused for raping a Latina. He is completely innocent, but ends up in the slammer. Nothing can change the young Latina’s accusation – not even Fonny’s mothers going to Puerto Rico to talk with her. She has disappeared there. This is an elegiac cinematic work that captures the effect of deep love. The style  of slow motion plays like a graceful dance between the two lovers. Using voice over from Tish and interweaving scenes from the past and present, we visually follow their woeful plight trapped in racism. The movie based on the James Baldwin’s novel

THE REPORTS ON SARAH AND SALEEM (Directed by Muayad Alayan)**** 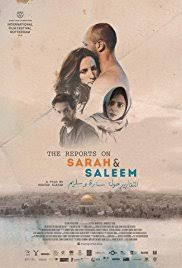 Saleem, a Palestinian bread deliverer has sexual encounters with Sarah, the Jewish owner of one of the cafes he delivers to. One night, an Israeli guy at a bar comes onto her, and Saleem brawls with him. To get even, he is accused of recruiting Israeli women as spies. He is forced to write a false report. Sarah gets embroiled in this, and to protect her husband who holds a high position in security intelligence, and to protect her marriage and her own reputation, she denies even knowing Saleem. Meanwhile Saleem’s pregnant wife gets to the bottom of lies and is determined to unearth the truth. She corners Sarah, but with no luck. But tables turn in this thriller movie that is tense from the get-go. Infidelity caught in political webs, intrigue and violence create intense and mounting plot twists. 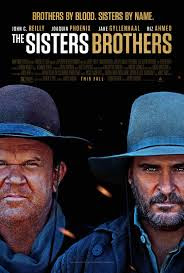 Set in the 1851, this rough and tough epic Western has Eli Charlie Sisters two brothers who happen to be assassins. One  is very violent, the other violent but more clever than his younger bro. Both have been hired bro by the Commodore to track down a man who has the formula to spot gold in water. It’s the gold rush times, and it seems lots of folk want to find this alchemist. Another man is also hired to find him, but he ends up in trouble with the brothers, and then the table turn on all three. Eventually they find the magic man and before you know it. They are friends wanting to seek serenity and the commodore who they do find.
The movie plods on in a unique, but weird plot. The brothers have their own soft side, even sobbing at times as they travel into the American Far West. Some of the scenes looked staged, but the landscapes are breathtaking. Comedic at times and spider scary in one particular moment, the movie has its own saving ingredients. The cast was good: John C. Reilly and Joaquin Phoenix (the very violent brother), Jake Gyllenhaal, and Riz Ahmed did an admirable job. This film was based on the Canadian novel with the same title, written by Patrick de Witt. 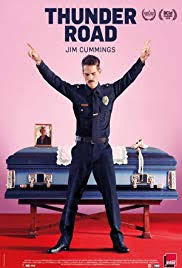 
Officer  Jimmy Arnaud announces at his mother’s funeral that he loved his mother. He says it over and over again in between a lifetime of anecdotes attesting to his mother’s love for him. But he was a rootn son, and in hindsight he realizes this. He breaks down during his long speech, but not without dancing to her mother’s favorite song,” Thunder Road”, by Bruce Springsteen. The machine does not work, so instead he dances without music in the church  as everyone looks on in disbelief, Soon, Jimmy is losing control of his behavior jumping between insults and saying, sorry. Poor Jimmy soon goes to court to fight for shared custody of his daughter just after he’s served divorce papers. During the court scene, the judge is shown a videotape of the dancing officer at the funeral. He’s doomed. Now he has nothing, including his job from which he was fired. But reversals have a way righting wrongs, Great acting by the director who wrote the script in two months on the subway, and sold it to pay for his fiance’s ring.  This film is funny and compelling. It deserved its Sundance Festival acclaim. 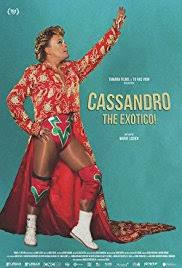 A Mexican lucha libre wrestler, Cassandro is gay, a worldwide champion in his sport and a supporter of all the underdogs. He’s campy but like a tragic clown has multiple pain inside his soul from childhood abuse and as an adult, has endured endless surgeries and severe injuries caused by wrestling. He says his pain is physical and mental. Part narcissist, part showman; he’s a daredevil that flies into the audience and a mixture of all that makes him free from restrictions. His meditative energies go into Indigenous Mexican rituals to calm his complex spirit that torments him. This is a candid, refreshing documentary that shows him putting on make-up, getting dressed in long extravagant  ornate beaded capes  with trains inspired by Princess Diana’s wedding gown, this film uncovers a man of great honesty.
________________________________________ 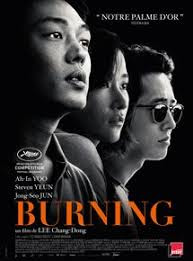 Jong-soo runs into Hae-mi, a girl who once lived in his neighborhood, and she asks him to watch her cat while she's out of town. When she returns, she introduces him to Ben, a man she met on the trip. Ben proceeds to tell Jong-soo about his hobby, burning old greenhouses. Ben is always smiling; Jong- soo is always glum. He wants to write a novel, but can’t. As the film moves on, Ben is far more than meets the eye, This psychological, thriller coils like an anaconda, and the prey meets the killing ending to this excellent Korean film that captivates in all ways. 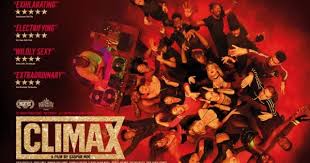 A mix of psychedelic mayhem with bacchanalian revelry as totally amazing dancers occupy the floor of an old school. The sangria is spiked with LSD so everyone loses their mind. There’s knife slashing, sex, beatings and more .This film shows us the crazy culture of dancing madness in 1996,b even more cool is every movement in this cult film is dance-like. Surreal and what I call art-trash, its got that voraciously unbridled vibe of the 1990s. 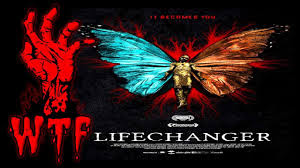 Ever had the compulsion to look like, act like, talk like, even hold all the memories of another person and be them.
This cult-like horror flick has a narrative voice-over that is philosophical and dark. The change of  comes with its own horror show, including cutting up the unlucky victim. Signs each is about to become another includes grey mottled marks all over the body. It would seem that the motive  for all this is as vague  as the film’s intention.  At the festival’s Q & A, the director did say the movie could use another draft, and I would add more on-screen reasons for taking over the body of another. They say imitation is the highest form of flattery, but this film graphically begs to differ. 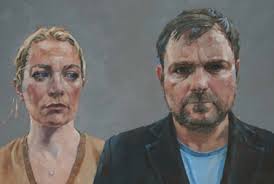 Skittish annoying fragmented camera shots focusing on different conversations of people coming into the gorgeous estate to celebrate New Year with the Burstead family, headed by Sandy, a tough lady who hurts her leg falling at the entrance to the mansion. This seems to foreshadow the antagonistically relationships revealed in this annoying film. Putting the plot simply:
Colin hires a lavish country manor for his extended family to celebrate New Year. Unfortunately for Colin his position of power in the family is under serious threat from the arrival of his estranged and hated brother, David.


The film was ridiculous and we could not care about any character. Charles Dance  who plays a gay Uncle Bertie how wears  earrings and skirt was totally miscast, though the acting of all was brilliant. Nothing, however, can save this relationship film that presents a rocky no-fun ride for everyone, including the audience. Neil Maskell as Colin was remarkable. He plays anger like a tiger devouring his prey. 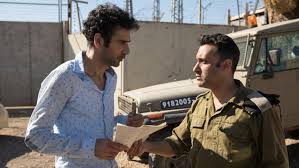 This film is a fine comic gem. Salam is a quiet 30-year-old Palestinian living in Jerusalem. He nails  a job, working as an intern voice coach on a popular Palestinian soap opera. He's broke, but is not afraid to voice any objections to the script - even a single word, he thinks is not fitting.The film opens with the movie set playing out with the actors. This  film wasmade in Ramallah. Every day Salam must pass through an arduous Israeli checkpoint to reach the television studios. he gets pulled over by asking the female guard if the word "explosive" is the wrong  word - an insult- in fact, to use to describe a woman. That word is in the script and he objects to it. The female guard reacts to that word and that's why he is pulled over. he meets the commander of the check point, Assi, whose wife is a huge fan of the show. Assi gets involved in the writing of the show. Salam soon realises that Assi’s ideas could get him a promotion as a screenwriter. His creative career catches fire until Assi and the show’s financial backers disagree on how the soap opera should end. Caught in the 'crossfire" the Army officer and the Arab backers, Salam can only solve his problems with a final surprise of creative genius. 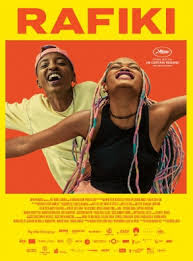 Homophobia is a universal evil rampant in even the smallest corners of African cities. This film sensitively and with great subtlety brings tow teenage Kenyan girls together. but as they fall in love, malicious forces come into play -- one being the fact that both fathers are running against one another in the upcoming election. Still, despite intense obstacles, love prevails. Friends is the translation of the title. In this film, the two protagonists move from not liking one another in the beginning to loving one another. A lovely film. with slow moving nuances.
Posted by nancy snipper at 5:47 PM