all photos taken by John Rockwood 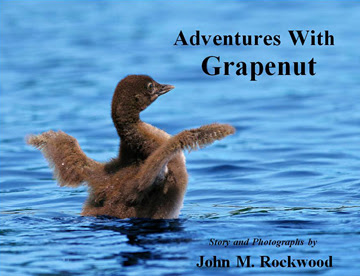 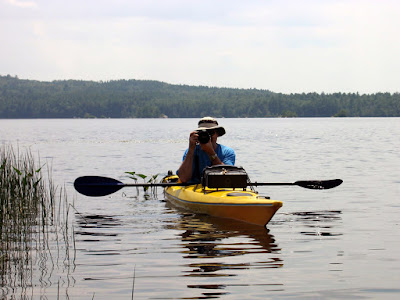 In this particular book, he recounts how he made the “acquaintance” with a four-day-old lone chick he spots swimming near the Grape Islands on Lake Massabesic. He thinks it might be a chick that belongs to a loon pair, he has named the Grapetons. They were banded for ID by the Loon Preservation Committee. John had been photographing this devoted pair of loons for the past six years. 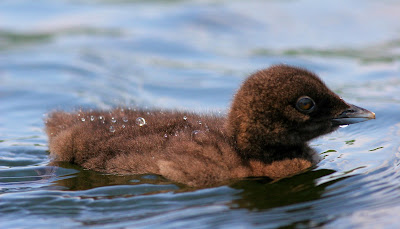 
Amazingly, this little chick seems to ‘adopt” John as his new buddy.  He hovers around John’s kayak, making small hooting sounds. Could he be after a piece of the snack John is eating? Desperate to feed the chick, John makes his way to shore to catch minnows for the little chick he named Grapenut. 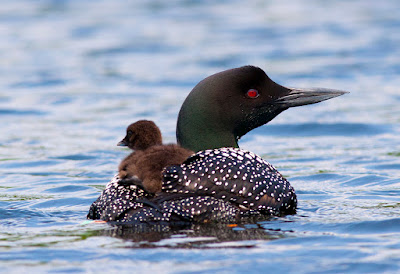 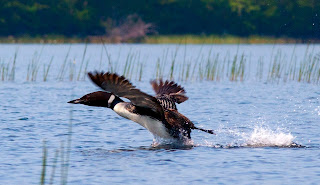 Soon the Grapetons are running across the water to warn the little chick of danger; in fact an osprey was in their midst.  John soon becomes the baby sitter for the newborn until his parents return within the next hour.


In this incredible true story John keeps his lens on Grapenut and his parents as they teach him the ways of the water.

Grapenut and John become joined at the hip, except when the little fellow would play Hide and Seek with him. Indeed, Grapenut proves to have a mischievous but fetching personality. Seven visits later, Grapenut is on his 46th day of life. John discovers Grapenut’s stubborn idiosyncrasies that do not always  work in his favour. One specific day, he witnesses Grapenut in a very dangerous eating situation. In fact, John finds out the little guy has a stubborn streak that nearly costs him his life. 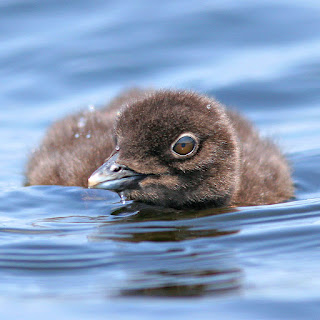 Using simple text, and stunning photos, the story vividly chronicles something so rare and amazing. John warmly captures the near day-to-day growth of Grapenut. He witnesses the Grapenut’s klutziness and set backs in events that lead to his adulthood. Most importantly, John and Grapenut are friends for life.


The book is educational as John explains many aspects in a loon’s life. The story is inspiring. It is an incredible testimony to John’s love and knowledge of loons. A portion of he proceeds from the sale of this book will be donated to the Loon Preservation Committee in Moutlonborough, New Hampshire (www.loon.org), and the Audubon Society of New Hamsphire (www.nhaudubon.org).


You can order Adventures with Grapenut at:  www.loonphotog.net