BAROQUE SPLENDOUR ALL THE WAY WITH BORIS BEGELMAN

You couldn’t have ordered a better baroque concert than the one presented by Arion Baroque Orchestra this past Sunday, The generous offerings on the plate featured the exquisite musical tastes of Brescianello, Quantz, Vivaldi, Handel, Bach and Telemann. The program’s magnificent music filled us up, but we greedily hungered for more. We got it at the encore with a robust segment from  Corrette's "les sauvages" – one of his "Concertos Comiques"; he wrote 25 of them.
So perfect was the matinee performance, so breathtakingly mesmerizing was it; and above all – so rare an experience for us to behold, witness and love the virtuoso brilliance of Russian violinist, Boris Begelman – we were beautifully bewitched by it all. And he conducted too. 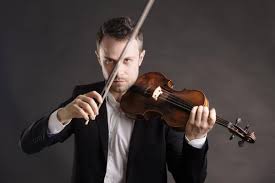 Particularly impressive was Mr. Begelman’s herculean ability to perform Vivaldi’s exorbitantly difficult “Concerto in D major” in which the composer pays tribute (1772) to the sacred relic of Saint Anthony of Padova’s tongue. At one point, Mr. Begelman’ s fingers played right up to his instrument’s bridge – barely leaving a hair- length of room for him to bow -  but he did just that ascending with the stroke of the bow into successive high pitched notes that rung out as a bird peeping higher and higher. He is so amazing, and what was unusual was his unaffected, almost expressionless face as he played near-impossible passages that demanded rigorous bowing, contrasting tempi, and unbridled passion within the various dynamics. He poignantly achieved them all: fortes dropping to pianissimos within seconds; lilting mellifluous melodies and majestic sturdiness, as in Bach’s “Concerto in A minor”; and the sweet lushness  we all enjoyed, tantalizingly delivered in Telemann’s “Concerto in F major for three violins”. In this work, we witnessed two great violinists who are members of Arion, stepping out front to play as “soloists”. Hats off to violinists, Chlöe Meyers and Laura Andriani. Their playing captured our attention as their instruments both lustrously and capriciously engaged with one another, and at various times played with Mr. Begelman as a trio while the orchestra often strode in boldly or enchantingly – richly enhancing this delightful Vivaldi-influenced work.
Another first violinist of note is Tanya La Perrière. She passionately produced vigorous moments of sporadic violin dialogue with Mr. Begelman.
Indeed, Arion’s own virtuosity is indisputable. From gentle harmonious adagios to allegros and prestos of such alacrity, the orchestra displayed dashing technical skills to vividly convey the expressive emotions inherent in each piece. This calibre of performance exuded a sophisticated confidence – the kind that only comes with seasoned experience and excellence. Thirty-seven years old; Arion has garnered multiple prestigious awards for specific concert recording, including the covetous Opus and Felix – and this happening alongside numerous nominations).
Finally, one must praise the duet dancing of two fast fluttering flutes played by Claire Guimond and Alexa Raine-Wright. They effortlessly brought to life Quantz’s “Concerto in D major for two flutes.” Flying fast together in all kinds of directions – taking off like playful birds, their perfect harmony tickled our imagination; the flirtatious flutes joyously jaunted – conjoined as a pair. They not only melodically skirted about one another, but they also invited the orchestra into the fun, knowing a full flourishing sound of glory strengthens the validity of lightness and whimsy.

Order your tickets for Arion’s next concert. For all information,
call (514) 355-1825. Visit the website: www.arionbaroque.com

Posted by nancy snipper at 5:39 PM