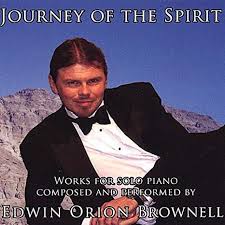 Edwin Orion Brownell, a Montreal pianist and international recording artist whose original music is played on radio stations across five continents. He's delighted audiences with live performances in Israel, North Africa, Europe and across North America,, and nothing can stop him during these challenging times because he is  now giving regular evening Facebook Live concerts online.

Besides performing at Place des Arts and the National Arts Centre, Brownell is always composing. Some of his most stirring work has brought tears to audiences during his  evocative performances at the Yad Vashem Holocaust Museum - just outside of Jerusalem, and at the Ein Gedi Concert Hall - also in Israel. In fact, this gifted pianist has globally graced stages in so many other prestigious concert halls, his concerts that exude stellar technique and passion have earned him international acclaim.

Trained classically, Brownell has recorded six solo classical piano albums and has four chamber music albums of his own works, performing with musicians of the Metropolitan Orchestra. Not one to just play the ivories in just one genre, he is also a well-respected rocker, having played with the members of April Wine, Offenbach, Mahogany Rush and the Guess Who, many of whom guest on his five rock albums.

Over the last two decades Brownell has focused on performing solo at retirement homes and geriatric hospitals, and in 2019 gave an average of 14 shows each week at residences in Montreal and Ottawa like Donald Berman Maimonides, Jewish Elder Care, St. Andrews, St. Margarets, the Glebe Centre and others. He loves connecting with seniors and his music is a profound source of healing and comfort to them. At these residences he performs a mix of music including his own classical and rock compositions, romantic classical music, oldies, and jazz, rock and blues standards.
His live audience members listen in from as far away as Indonesia, Morocco, Israel, Hungary, Latvia, Denmark, the UK, France, Brazil and the United States, and many members of our Health Care team listen to relax after their long shift at work. His first concert has been watched by nearly 3000 viewers, and hundreds tune in each evening to join his online community of love and music.

Dedicating songs and concerts to those who are fighting or suffering from the virus, Brownell has created a safe space online for people to gather to find strength in community each night. For many, the Corona Concerts are a meaningful and effective way to connect with friends and family to cope with the loneliness caused by the plague afflicting our planet.

Edwin remains humble; he is a gift to us all!

"I feel blessed to be able to do something meaningful, especially when it is so needed. To be able to bring  people from all around the world together, even when we are forced to be apart, is both a pleasure and an honour."

Read the comments at each concert (links found at the here links at www.brownellmusic.com/live) to get an idea of how this has helped people.

Posted by nancy snipper at 5:25 PM