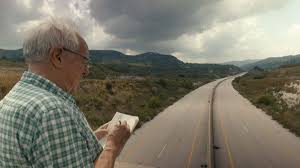 Robert Fisk  is a British journalist who writes for numerous newspapers and has published books. He lives in Beirut. he says
"My job is to record people suffering."
And that is what he's done most of his life.
But this great man doggedly brings to light with passion and commitment all the war-torn regions of the Middle East. This doc starts in the year 1980. Robert is roaming though the streets of Syria, saddled by ravaged bombed buildings made more relevant as bombings and rockets and grenades are heard at the border. He is in Abadan at the Iraqi front lines as the country and Syria pummel one another. 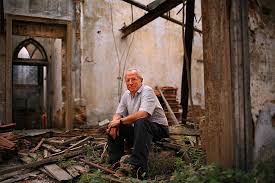 He visits and interviews t a young girl, so many victims of the Al-Nusra at the Syrian border. He digs deep to find facts. In Lebanon, the camera shows all the dead bodies of the Sabra and Shatila refugee camps, killed in a  massacre by Israelis. 1700 civilian's bodies are buried in a shallow embankment.
Robert travels to Bosnia when he finds documents of weapon sales and track down the weapons factory manger whose signature appears in the sale. The tenacious reporter want to find out where these weapons went. Who bought them. He makes a compelling point that even with legal sells that have the end certificate as proof of legality, no one bothers to find out where they are used and when. His reporting of Israel bombing and the rape of the land and usurping of the land lead him to revisit a Palestinian who takes him to see the land he once owned now occupied by Israelis. Some 20 years ago he had interviewed this man, hoping things would change. Robert ends with some grim thoughts: that no matter what is reported, it will never change things, but at least , the world can't say we didn't know. We were never told. Robert says anger increased as he got older and with it came the cynicism of reality. Still, he will never stop telling the truth. And he is not afraid of editors or feeling he must play a football game of interviewing each side, when one is not the perpetrator but the victim. There are few places he has not been when it comes to war. A man obsessed by finding out, his ultimate motivation is to stop the labeling and show that brutality is everywhere.  A great film.Watch and learn!
Posted by nancy snipper at 3:56 PM