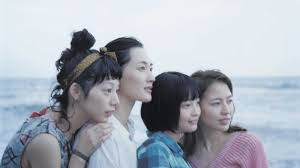 Although the intimacy of nature in the seaside Japanese village of Kamakura reflects the beauty of the three sisters’ bond in director's Hirokazu Koreeda’s 2015 film, it suffers from sentimentality; the story is soaked in syrupy scenes and flawed unlikely events.
Deep scars have carved some bitterness in Sachi, the oldest sister (stoically acted by Haruka Ayase) who has assumed the den mother role. The father, now passed had left his daughters for another woman, and their own mother then abandoned the children (this part of the plot is revealed in a confusing manner). The father had Suzu, another daughter who is about 14 when the film opens up. At her father’s funeral, Sachi invites her to come live with the sisters, and she does.
Sweet and idyllic, their life unfolds, and reconciliation has its final rewards when the sisters’ mother suddenly appears on the scene to attend a family friend’s funeral.

The film was based on the manga series; the story’s delivery is surely entrancing in magnificent manga animation from, but as a realistic film, it moves as slowly as the caterpillars in the plum trees by their seaside house.

Relationship films without credible and pithy drama risk the telescope effect – we stare out  at the screen, waiting for something exciting to happen. An interior-looking piece of majestic beauty with lovely music, it nevertheless lacks punch. Not a tear or chuckle was shed by the audience during its press screening in Montreal. Although I like plum wine, it spilleth over too much in this film too much was much in the ffilm. But it did receive a five-star rating when selected to compete for the Palme d’Or at last year’s Cannes Film Festival. 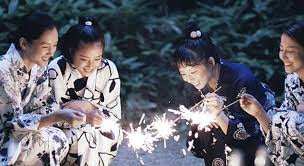