JOHNNY AND THE BEAR 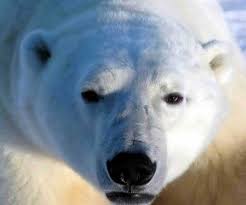 It was a quiet Saturday afternoon. Johnny was putting together the
last pieces of his moose puzzle when he heard his father shout,
"Johnny."
And his mother shout, "Johnny."
And his sister shout, "Johnny."
"What?" he answered back.
"Come on downstairs," said his father.
"And hurry," added his mother.
"Why? I'm busy."
"There's a bear," yelled his sister.
"A bear?" Johnny echoed excitedly.
"A bear!" everyone shouted.
Johnny looked at his unfinished puzzle. "Well, Mr. Moose,
your other antler will just have to wait." Johnny rushed downstairs,
put on his coat, and followed his father, mother and sister outside.
Everyone on his street was walking in the same direction. At the end of the street, there was an enormous crowd. Johnny could see that almost everyone from the town was there. What's going on? As he pushed his way through the crowd, dodging elbows and arms, he heard cries of "Oooh...Ahhh...Wow!"
Finally, he reached the front. There, lying in a small snowdrift was a polar bear. It was very, very large, and very very dead.
"What a beautiful bear!" somebody exclaimed.
"It would make a lovely carpet," commented another.
Johnny overheard a man in a uniform saying that the bear would be removed from the street and buried in an out-of-the-way garbage dump the next morning. Johnny stood there for a long time – even after everyone had left. He stared at the lifeless eyes of the bear and felt very sorry for it.

He went home for supper. His family was excited about what they had seen. They talked and talked about the bear - about how beautiful its fur was and how big its body was. Johnny's father even said that the bear's head would make a good trophy. "Not in my house," joked his mother, and everyone laughed - everyone, except Johnny. He didn't feel like laughing or talking. All he could think about was the bear lying so cold and still in the snow. The more he thought about it, the sadder he became. When his mother served dessert, Johnny excused himself and went upstairs. But he couldn't sleep one wink. Finally, his eyes closed and he began to dream.
He saw the bear alive and roaming in the forest. In the distance, he could see the bear's mate and children - little cubs waiting for their father to come home, just the way Johnny waited for his dad. He thought about what it would be like not to have your dad come home one night. It would be lonely and scary. His mother would cry. Johnny knew the bear would never come again. He hoped the little bears with their mama could find enough to eat without their father's help. It was a sad dream. Saddest of all, Johnny knew he couldn't help them. 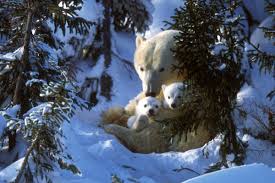 When he woke up, Johnny could think of nothing but the bear. He wanted to find out everything about it...where it came from - what it was doing in town - why it ended up dead!

He quickly dressed, ran downstairs and made for the door, shouting to his mother on the way out. "I'll be home late tonight, because I have some important homework to do."  In a way, he was telling the truth.
The first thing Johnny did was visit the police station. When he asked a policeman why the bear was killed, the policeman answered, "Because it wandered into town. You can't have a bear walking all over town. Why,it would scare everyone!" This policeman wasn't helping Johnny
understand any better.
"Why was it in town in the first place?" Johnny asked.
"Why? I don't know why," replied the policeman impatiently. "Go ask Mr. Dithers, the taxidermist. He knows about animals.

So Johnny went to Mr. Dither's store. Outside he saw a large sign that said: "WE'LL STUFF ANYTHING." Johnny opened the door, and entered a big, cluttered room. He felt a hundred eyes staring at him, glaring at him from all directions...from the walls, the shelves, the tables - even the top of the cash register. Everywhere he looked, they looked too. Owls, cats, dogs, beavers, squirrels - even a wolf...all stuffed...all dead. 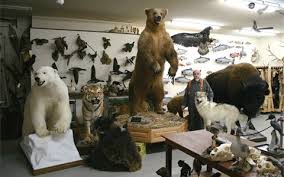 A man appeared. He had a big, bushy, black beard and a hooked nose, upon which sat a pair of dusty spectacles. "Yes," said Mr. Dithers. How can I help you?"
"Well, I was wondering if you knew why that bear wandered into town yesterday?"
Mr. Dithers scrunched up his face. "No." he said sharply. "I can't say I know why. Hum, why indeed? Good thing it's dead, though. No telling what damage a bear like that might do. My, my, didn't it have a beautiful coat of fur? So white and plush!"
"Yes, but it would have been more beautiful if the bear were alive," Johnny added sadly. "Alive!" screeched Mr. Dithers. "What a preposterous idea! What's the use of having a bear alive? Really boy, what a ridiculous notion. Alive! Ha!"
Johnny left in a hurry. Mr. Dithers wasn't helping him understand, any better.
Outside, Johnny spotted a newspaper stand. In big, bold letters, the headline read: NEW AREA BEING BUILT...LAND AND ANIMALS BEING CLEARED AWAY FOR DEVELOPMENT. Suddenly, Johnny realized what was happening.

He took a bus to the new hotel site. On the site, he saw an important looking man giving orders He approached and said to the man who was wearing a construction hat, "Why are you building a hotel on the animals' land?"
I don't know," said the foreman." I don't make decisions. I just follow orders. "Did you know a bear was killed in town, yesterday?" asked Johnny. "A bear? Well, I'm just a foreman. I don't handle bears. Try the Mayor."
Johnny felt he was really getting somewhere now. He hopped on a bus that stopped in front of the building where the mayor's office was. Johnny knew this because on the building was a sign that said: CITY HALL.
Once inside, Johnny asked the guard where the

mayor's office was.
Without saying a word, the tall man raised a gloved
hand that pointed
to a flight of marble stairs.

Slowly Johnny began to climb. With each step, a loud
echo was heard.
It seemed to travel up the stairs, down the hallway,
right to the mayor's office door.
Johnny finally reached the top of the long
staircase, and read the sign: MAYOR STERNDOLT.
Johnny followed the sign's arrow which
pointed to a desk. Behind it sat a little lady.
This must be the mayor's secretary.
"I want to see the mayor," Johnny boldly said.
"Do you have an appointment?" asked the lady,
without looking up.
"well—not exactly but.."
"Have a seat," she interrupted.
She then got up and left. Five minutes later, she
reappeared and sat down once again. An hour passed.
Suddenly, the silence was broken as
the wrinkled-faced lady looked up at Johnny, and
announced, "Mayor Sterndolt will see you now."
Johnny entered the mayor's office, and sat down in
a big, big chair.


"Speak up, lad." Mayor Sterndolt said in a loud
voice.


Johnny found his courage. "Why was the bear killed
yesterday?"

building hotels and swimming pools in the new
land. 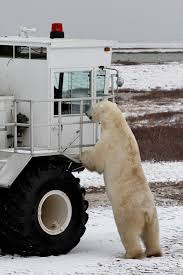 The bears seem to be running out of
food, so they come into town, and we kill them." 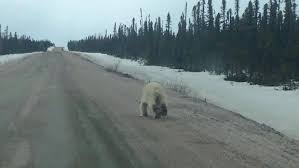 "It's not fair!" Johnny suddenly shouted.


"Why do you have to build hotels there, anyway?
Why can't you build somewhere else, and leave the


There was a long moment of silence. Then the mayor
took Johnny's hand and led him to an enormous
window.

In the distance, Johnny could see many buildings

under construction. Making a

proudly said, "This is beautiful land!

town. Now you can understand that; can't you boy?"
"All I understand is a bear died. There's no reason
to kill anything, even for money! Why don't you

build hotels away from the bears' homes. People
could go and see the bears alive and free?
Mayor Sterndolt let out an enormous loud laugh –
right in Johnny’s face.


He then told Johnny, he was too busy, and Johnny
had to leave.


When Johnny got home, He felt sad. In fact, he went
right up to his room


He stared down at his unfinished moose puzzle.


“I know what I can do to stop this. I’ll go
to college and study animal protection.


He put the antlers on the moose puzzle, and then
stared at the


moose for a few minutes. 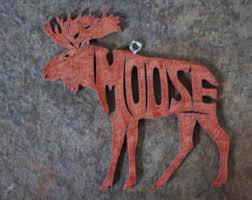 “Don’t worry I’ll protect you when I get older". 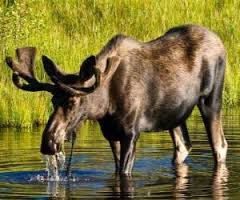 (This story was written 22 years ago. The setting is Churchill Falls Manitoba, a place where polar bears began coming into town for decades)
Posted by nancy snipper at 11:12 AM