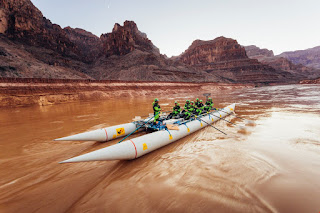 The goal of rowing down the Grand Canyon is audacious indeed, but to break the record of arriving at the end in record speed takes great fortitude. Eight men prepare for their water adventure, building and testing their boat, preparing the meals, equipment, training in the gym, but the true test is once they launch off. 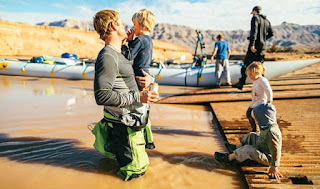 Battling wild waters, broken oars, fatigue and night’s darkness adds great stress to their feat. 179 miles and 21 hours later, the boats’ pontoon suffers a puncture – just at the last part. It takes 3 hours to fix it. But as one member says, it really is not about setting a record, but about doing it and finishing. They make it in 39 hours and 24 minutes. “It’s not about achieving greatness, but striving to make it through and experiencing companionship along the way,” says the team leader. Great photography and honest talk by members of the team during this 24-minutes film. (Screened at Montreal's FIFA  - International Festival of Films on Art)
Posted by nancy snipper at 9:24 AM