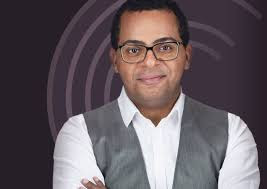 It’s farewell to Alain Lefèvre – renown artistic director of Lanaudière Festival for decades, and hello to the highly gregarious Gregory Charles, a gifted man of superb artistic talents: a comedian, a pianist, owner of two celebrated radio stations and a passionate crusader for music. His career as an entertainer has spanned some 25 years. His popularity is second to none.

It’s a celebratory year for the festival as it enters its 40th season and new beginnings are afoot. M r. Charles expressed his determination to make the festival totally inclusive regarding classical music reaching far beyond Lanaudière’s pristine setting.

Having grown up with music in his family, his global outlook is not surprising. After all, for ten years, he brought together more than 80,000 choristers from around the world as artistic director of Mondial choral de Laval, a musical event that reached over a million listeners, and his TV appearances are pretty much internationally broadcasted.

The season’s opening concert fittingly presents Alain Lefèvre in an OSM concert with its music director Kent Nagano. The organ and orchestra will open this July1st evening program with a work by Samy Moussa performed by Jean-Willy Kunz . Ravel’s “Concerto in G” which is them followed with the final piece, Mahler’s mighty “Fifth Symphony”. Exciting music for sure.

Also in the concert series are I Musici de Montréal and Les Violins du Roy. A banquet of timeless composers are being featured this summer, but it’s rare to hear Emily Oulousian, winner of the Virtose 2016 play “Grieg’s Piano Concerto”. That same night, (Saturday, July 15th), Zhan Hong Xiao, winner of the Virtose 2017, will be playing Liszt’s “Piano Concerto No.1”. The final concert for the festival is Wagner’s 4-hour “Parsifal” – conducted by

Yannick Nézet-Séguin. This opera has not been heard in Quebec for a century. Now you have the chance to hear it. Wow!

Music will be spilling out of everywhere in the area, including chamber music and more inside four churches. The pickings, including jazz and Broadway musical numbers are so exciting, so please consult the website www.lanaudiere.org for the line up of concerts, ticket reservations and venues.  You can also call 1-800-245-7636 or 450-759-7636.The festival runs from July 1st to August 6th. 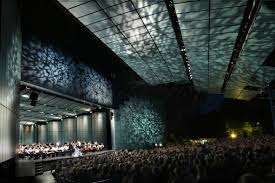 THE MIRACULOUS MATCH OF LEFÈVRE AND NAGANO
July 1st – Canada’s 150th birthday celebrated two iconic artists at Lanaudiere’s sterling festival. Alan Lefèvre former president of the festival delivered a short but passionate reveal about what the festival meant for him: home. He pleaded for the world to uphold classical music festivals the world over and equated it with the highest values of democracy. 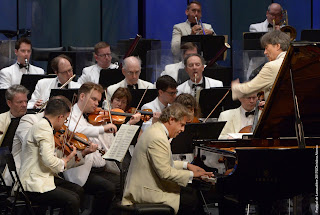 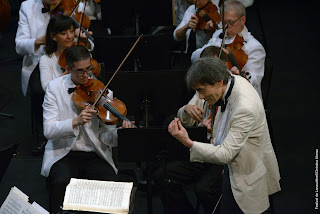 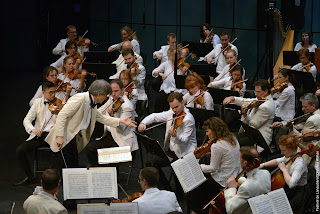 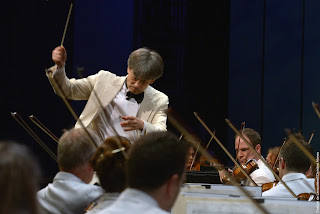 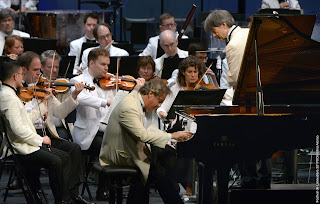 His astounding performance of Ravel’s “Concerto for piano in G major” was so sublime.  Right hand trilling as the left hand took up the melody displayed such graceful, nuanced expression imbedded in an incomparable technique. A powerhouse of energy, his presto was breathlessly leviathan.
Kent Nagano brilliantly paired his majestic maestro conducting both with the pianist and his beloved Montreal Symphony Orchestra. So dedicated is he, he was pouring sweat by the end of the Mahler performance – a complex work in five movements of vigorous challenges:  5th in C minor – a dazzling demanding  complex program number that never seemed to end. The Adagietto was so heartfelt, and evoked palpable awe from the audience.
The opening 11-minute work by Samy Moussa  “A Globe Itself Infolding” was like a chrysalis unfolding as a metaphor for the slow and beautiful birth of the world. The organ, played by Jean-Willy Kunz, was movingly incorporated at key moments and was most profound in its impact.
When rain broke out, Mahler had his story moment, yet nothing could dampen the outpouring of excitement and awe when the evening ended in thunderous applause. The concert was a long one – almost 3 hours. We got our money’s worth through divine music.