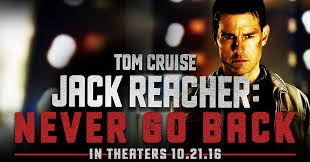 Not much to admire about this action film, other than the teenage girl who may or not be Reacher’s daughter.
She’s witty and unlike all other characters, seems real. The plot has Jack back trying to uncover the government plot that involves silencing those who have discovered an illegal clandestine smuggling operation run by a US army dude that involves Afghanistan. What I wonder is how does one get slammed repeatedly against a cement wall and keeping on duking it out. There was so much violence; it overshadowed all the characters and plot. It was as if the director knew nothing could save this lackluster film, not even the indomitable Jack Reacher A.K.A. Tom Cruise.

Posted by nancy snipper at 7:26 PM