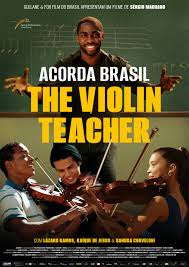 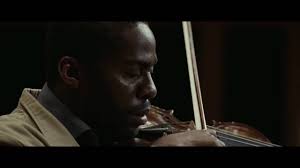 Violinist, Laerte (Lázaro Ramos) freezes during a prestigious audition for OSESEP in Brazil. Needless to say, he did not procure the position of first violinist. He is offered a job teaching a group of uncontrollable teens how to make music as an orchestra.

It is mayhem and a total disaster, but one kid, named Samuel shows promise. Drugs, a riot and a motorcycle chase by police lead to a fatal encounter. To make it all worse, there’s a violent gang that has two of the kids in their shackles, beating them until they pay up on money they owe. They show how dirty and dangerous life is in Brazil’s favelas. Still, Laerte is making great progress with his little orchestra and things go well at that end. 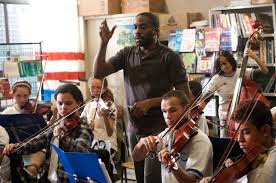 A tragic turn of events set the plot into a downward hell, but the music of Bach and Vivaldi prove to be cathartic for the kids as they perform in the favela for hoards of people hanging over the balconies to hear their nighttime concert. Laerte has his own dream and it gets fulfilled. Based on a true story, the film is touching – particularly poignant for  a music lover and that special kind of heroic teacher who never gives up on belligerent kids who come under his/her baton. The film was screened at Cinema du Parc during Montreal's Brazilian Film Festival.
Posted by nancy snipper at 9:06 PM