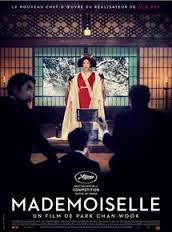 Lesbian Erotica Teases Nastily within a Duplicitous Trio
It’s a pretty far-fetched plot whose sketchy credibility is only strengthened by the terrific acting and sumptuous costumes that beautifully reflect Korea in the 1930’s. But a dark tone infuses the film, and so it should; the characters are live under the Japanese yoke. But this film is not about war; rather it is about ambition, sexual lust, lies and identity theft. That’s what it takes for the crooked phony Count Fujiwara to send his lover/ maid Sook-hee to Lady Hideko, a reclusive and fabulously wealthy mademoiselle who in turn must obey her uncle – a sadist who enjoys hurting young and old alike.  She is supposed to marry him, but Fujiwara’s wants her hand in marriage to get her inheritance, and this, she does not keep from either woman. 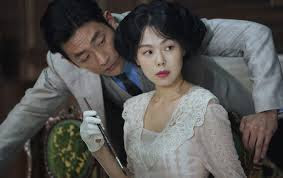 The film works in parts including flashbacks when we see how she is subjugated – forced by her uncle to read erotica to his friends and pose as a sexual object. As plans are hatched, things take on twisted reversals of fate for everyone. The film is an elaborate statement on sexual, gender and cultural oppression.

The sexual scenes, combined with and one gruesome one of torture were gratuitous – cruel to the eye. One wonders about the motivation behind this confluence of distasteful human traits that played so vividly in the director’s imagination and ended up in the characters he created in this film. 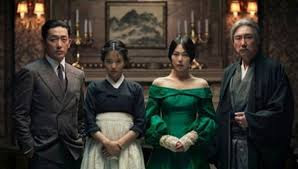 Sado-masochism, greed, pseudo-porn and lasting lesbian love make up the hodgepodge of this weird yet nonetheless compelling film that lasted almost two-and-a-half hours.

This film was first screened at FNC Festival 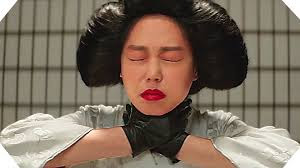 Posted by nancy snipper at 6:53 PM