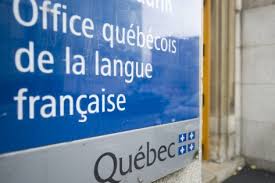 A while back, you may have seen those lovely looking people on Montreal bus panels - their faces smiling over this message: “La langue française, c’est la langue Quebécoise” – something like that – with a ‘vrai’ in there; or,  written on French classroom walls saying, Le francaise, c’est la meilleur langue.”

It also appears on local French TV stations using a seductive voice-over in an haut-art ad, showing contented, successful people in several professions and trades (note that very few ‘Québecois’ blacks or Asians are presented). Both of these ‘enlightened’ ads are sponsored by l’Office de la langue française. I find it all deceptive. Everyone looks so happy and carefree. The ad with its soft, diffuse lighting looks like it was created by a cinematic art director. But what lies beneath the glow? The Office is actually sending a succinct message, telling all native-born Anglophones and thousands of immigrants that French is the magic bullet. It’s clever subliminal advertising.

We all know that French is the operative language in the province. Isn’t this a platitude, so why did ‘le Grand Frère’ spend lots of money on such an ad campaign? You don’t see in Argentina - where there is a massive mix of languages and cultures – an ad saying: “Espaňol, es la lengua de la Argentina; nor in Germany, Greece, Spain, France or Turkey.’. So what’s up?

I believe  any "Speak French" ad is a highly visible attempt to remind all ‘outsiders’ that the ‘acceptable’ language is French. Unfortunately, this inference contains a subtext of exclusion: the ad devalues and even debases all other languages and their speakers. If you don't speak it, you don't belong here.

What I find appalling is the fact that this is the same kind of insidious knee-jerk reaction we get in racism. I say we ought never to judge a person by the colour of his/her skin or the language he or she speaks. This is not the way to go. It’s time we went past this. Intolerance is as easy to promote as lighting a match. Clearly, the intrinsic message in the ad is insensitive, and a tad incendiary, since it subliminally and subtly encourages us to think that we ought to disdain those who don’t use French every day in their lives here. It’s high time we begin to use our brains and a tempered heart to seize and appreciate every individual’s uniqueness. This is what defines humanity’s progress. Why can’t we have this message: «Le Québec, c’est la province ou chaque culture et chaque langue sont célébrées: un québécois traverse le monde ici; utilsant le français, ça va plus vite.» (The last part of this line is my conciliation to Bill 101).

When I was 16, I roomed with a francophone while studying Québecois French at Laval University one summer – a great experience. The following summer, I went to Glendon College to study ‘Continental French’. I learned French varies - not just the accent, but expressions here and overseas. My Haitian friend Marie from Snowdon claims that her French is the ‘real’ one; she’s a ‘vraie’ Quebecer.

I was nominated for a Mr. Christie award for my children’s book, ‘Les Cinq Sens en Folie’. Bilingual, even degreed to teach, I taught French in Ontario. My first job was in French here. I even taught drama and ESL at the French School, École Mont Royale, many years ago. But an incident taught me that exclusion is not based on language. I was invited by the Quebecois publisher to celebrate at a party. I made a comment (in French) that this is the way it should be: Anglophones and francophones having fun together, though I seemed to be the only anglais there. The cute fellow I was talking to yelled at me I would never be a Quebecer, I wasn’t wanted here. I persisted as I laid into a litany of my ‘French’ accomplishments, including my education, employment and Ottawa friends who were francophone. But I was a tête carrée according to this fellow. He had also written a kid’s book so I thought we had something in common – something to share. I felt rejected and discouraged, and left the party as an outcast. Maybe this incident was an anomaly, but this chap was refined, ‘educated’- Quebec’s pride.

Please Quebec, it’s time you started educating your own about tolerance, since you do have a generous immigration policy here (though the agenda smacks of ‘francisiation’: in numbers there is strength).
Quebec is uniquely great because of its diversity. Legislating culture and language threatens the most priceless language of all: democracy. 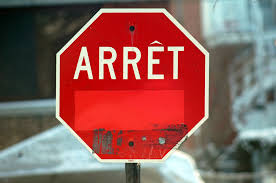