After the fast moving-events of the first film, Martin Ward (Colin Feore) and David Bouchard (Patrick Huard) have gradually grown apart as their lives and careers have taken them in different directions. Ward is now a senior officer with the Royal Canadian Mounted Police, and he is sent in to investigate what is going on with a car theft ring. Both buddies are reunited.
It would seem Feore is the cop that is more violent than his Québécois counterpart.  Both become embroiled in wacky car chases, outing the bad guys and fending off comments made a by a corrupt FBI head who turns out to have a thing against Muslims. Lots of jibes against French Canadians and stuffy anglos. Lousy plot with confusing situations and far too much violence to balance the laughs it attempted to get. Fore was too sentimental in manner, but Huard was as amusing and with-it as Mel Gibson was in “Lethal Weapon”. Loved the first one, but this one was unconvincing and both appeared to know it. They put French subtitles only when Marti spoke in English and other characters. but God forbid, they should be courteous enough to also put English subtitles for french which was mostly spoken in the film. If they want movie to go international, they had better take the enlightened path and incorporate English subtitles. 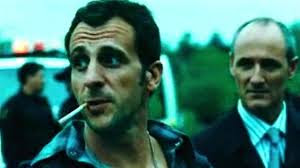 Posted by nancy snipper at 8:13 PM