Trio Fibonacci “Made in Canada” 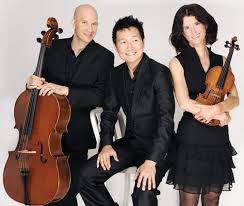 It was an evening of unabashed contemporary-style compositions by four daring creators, two of which were commissioned by Trio Fibonacci. This evening’s works fell into two lines of thought regarding contemporary music; it can either be conceptual in image input or completely cerebral in form. The first piece – Elemental was written in 2014 by Jeffrey Ryan. Its four sections – Earth, Water, Air and Fire offered astounding burst of crescendos and dramatic contrasts in use of the instrumental application and expression. To my mind, this fell into the image category. Piano strings were played inside the piano itself; I was hearing and seeing the naissance of the Big Bang, and as it exploded, and then the aftermath -what ensued: the creation of the four vital elements. I loved the rain-drop type lightness of water and its subsequent flow. The music evoked eruptive moments in our planet which from the beginning introduced the sostenuto of the violin and cello on a single note. This piece for me was conceptual in composition, and image visualizations were born via the music we heard.

The second work by Uriel Vanchestein was commissioned by the Trio and premiered in this concert. Cerebral in approach, the composer told me he had no feeling – no sentiment behind the piece. It was really an intricate play of notes in the sonata – rondo form of four basic notes: F, E, D# and C# used in a motif in three parts. The piece was called Création, and compared to the first piece, it was not nearly as interesting for me, despite the grand variety of instrumental application. It would be a marvellous piece put to a ballet of some sort as Stravinsky did in The Rite of Spring.
The third work performed was titled On the wake of the wind for violin, and the composer David Eagle definitely succeeded in conjuring up images of the wind on water and the transformative mutations of turbulence. Inspired by the poem written by Daniel David Moses. I thoroughly enjoyed the fact that the computer was subtly used to create an echoing sound at the beginning or the tail end of phrases. It was as if the wind was dying out and new gusts came into the air. The electronic aspect of this work was masterfully planned, and the effect was wonderful.
Finally, my favourite work of three continuous parts was composed by the genius, François-Hugues Leclair. Titled, Hymnen an de Nacht (Hymn at Night), this astounding work – commissioned by Trio Fibonacci – was positively inspirational. I could feel night coming on, and then I was led into its mysterious qualities of its magical darkness. The piece opened with the strings inside the piano being brushed. Here the bows of the artists were set down to create the dying down of light as night begins to ascend. The piano was muted several times so the inside strings when ‘brushed” would create their own tonal lines. It was so ethereal. Ever-so quiet slides up and down the string instruments then came into play as the artists returned to their instruments; good thing violinist, Julie-Anne Derome  had taken off her high-heel shoes to avoid any sound as she returned to her violin.
Nighttime held me in its grip. The ending part of the piece which offered moving harmony in ascension was god-like.
Trio Fibonacci pulled off a remarkable feat playing this highly interesting and challenging program. Their timing and virtuoso attack perfectly conveyed the excitement and ever-changing contrasts that marked each work. This composition fittingly marked the finality to the Trio’s programming season
Bravo!

Trio Fibonacci’s 2015-2016 season will take place on October 13th inside Bourgie Hall, Montreal. The program will feature the music of Robert and Clara Schuman, and that of Johannes Brahms. I can hardly wait!
For more information, visit: www.triofibonacci.com