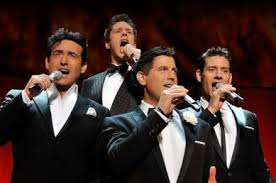 A sensational performance of personality and vocal power

Salle Wilfred-Pelletier in Place des Arts was packed with adoring Il Divo fans and first-timers about to fall under the magic of this charismatic group. People of all ages were there. Such is the timeless appeal these four fabulous singers have – ever since they joined forces to form Il Divo when music producer Simon Cowell first discovered the ‘power of four’.  Fast forward ten years into 33 countries and four world tours during which the dynamic Il Divo established their god-like stature, sweeping audiences off their feet while making classical cross-over-music history. The foursome has sold over 26 million albums and received 160 gold and platinum awards.
Indeed, their confidence, showmanship and connection to the audience was obvious during this May 28th Montreal tour-de-force performance.
The show’s fitting title, A Musical Affair: The Greatest Songs of Broadway featured popular songs from their sixth and latest album, A Musical Affair.The live 18-member orchestra opened up the show with an instrumental medley of our song favourites from musicals, including Evita, Phantom of the Opera, Cats, West Side Story, Les Misérables and more. And then the spell began: Il Divo’s four dashing figures made their entrance. Smoke slowly swirled from the stage floor, and as their faces came into view, applause thundered and voices roared from the hall’s 2,982 seats.
Their powerful voices blended into rich harmonies no matter the register and tonal challenges within the great variety of song melodies. Whether performing such big numbers as Climb Every Mountain or delivering such heart-wrenching numbers as Some Enchanted Evening, If ever I should love You, and Tonight. These romantic songs showed off the tenderness and the restraint each of these classically trained singers possess. Interestingly, each has his own distinct sound and background. The most opera-sounding voices came from Spanish baritone, Carlos Marín and American tenor, David Miller. Their lush tones melded richly with the pop genre tones of France’s Sébastien Izambard and with former rocker heartthrob, Urs Bühler from Switzerland. Together, the four created a varied vocal fest of sensual expressive brilliance. The volume and range each one displayed was rather mesmerizing, and the arrangements perfect – some parts of song strategically parceled off to the most appropriate voice for that passage in the song. In fact, I would have liked to have heard full length solos from each of them, but each song inevitably brought all four together in most moments of the song and always on the last line. I can’t forget how they ended Somewhere from West Side Story, it fluidly slid out as a piece of vocal silk on a single soft waning note. In contrast was the booming crescendo of such endings in I Did It My Way and I Will Always Love You (Whitney Houston would have been proud).
Glitzy guest diva Lea Salanga, added yet another exotic element. An acclaimed Filipina singer and actress whose multiple awards are as impressive as her lead roles: Kim (Miss Saigon), Jasmine (Disney’s Alladin), and Éponine and Fantine (Les Misérables) – excerpts from the latter two performed during this performance along with  the song Defying Gravity from (Wicked). 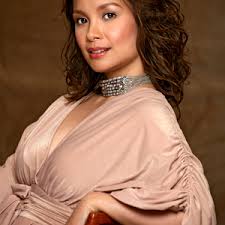 She really belongs on that stage; she immediately captivated us with her intensity and beauty. When she sang I dreamed a Dream, you could hear a pin drop; we felt her emotional anguish. That mood completely lightened when the fellows joined her vying for her attention in the song If Ever I Would Leave You (Camelot)


Indeed, the evening was not without jokes – often made at each others’ expense, such as when Carlos talked about his love and prowess with women; in fact, this boasting would have gone on and on had not one of the guys handed him a small container of those notorious “little blue pills”. That got a big laugh.
Self-deprecating humour about how poorly they spoke French came from Mr. Miller and Mr. Marín, but when the group polished off Céline Dion’s upbeat song, Que Tu M’Aimes Encore, their accents and diction were impeccable. The crowd went crazy cheering, standing on their feet, singing along and clapping the beat.
Projected images on the back wall and effective spotlighting enhanced the show’s presentation. But it was the guys who really stole the stage. Three encores and non-stop clapping continued for about ten minutes after it all ended with the parting song delivered in Italian and English Time to Say Goodbye.

Posted by nancy snipper at 2:10 PM