Lovely in feel, this documentary creates a meditative looks as it presents letters and photographs taken by the filmmaker André Bazin of several old Roman churches in Italy and France. 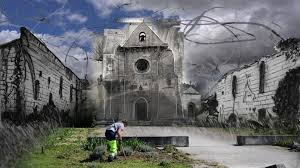 Most were weathered by time or partially destroyed by bombs. Animator Hébert recreates their façades – even placing people walking outside on their grounds. Narrated by Michael Lonsdale, the film project by Basin began in 1958 but it ended that year. Bazin died of leukemia. These points of historical referencing should have had a map on the screen to show the viewer their different locations as each one was examined. As well, the ending of the film was most unclear and jumped topic speaking about Martin Luther King, Hitchcock and the White House.
This journey into ecclesiastic monuments, although repetitive in some parts, is most peaceful to the eye.
(Screened at FIFA).
Posted by nancy snipper at 1:10 PM