A Wondrous Performance of Magnificat with Matthias Maute and Friends 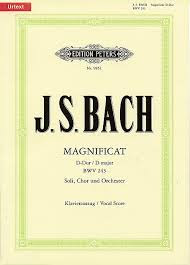 On Saturday, January 21, a large-sized audience was inspired by a rare concert that sublimely resurrected the utmost beauty inherent in Baroque music. The supremely noble interior of Montreal’s new Bourgie Hall (Montreal Museum of Fine Arts) with it stunning array of stained glass windows was sacredly fitting to the Magnificat program offered by conductor and recorder player extraordinaire Matthias Maute and his Ensemble Caprice.  The choral music sung by the18 artists offered typically reverent praise of God in lyric. The effect was magical mysticism. Bach’s Magnificat and Arvo Pärt shared most of the compositional honours – the former having been born in 1685, the latter still living. Yet the message of each was clearly similar as each verse resounded brilliantly in the Baroque vein; the technical virt
uosity of the vocalists and mid-sized orchestra was noticeably unified. The message was mainly of praise, glory and humility, though solemnity and reference to those who shun God’s omnipotence was evident in Part’s Magnificat. In each of his two choral songs, the choir was godly in tone and phrasing. The voices were immeasurably unified; the harmonies were glorious in colour and mood. The final notes, always lingering into the distance until silence spoke the final beat. Soloists Shannon Mercer (soprano), Philippe Martel (bass) were particularly captivating in Bach’s Magnificat.  Matthias Maute’s lively energy swooped over the musicians, leading them on to perform with gusto the Bourée and Gig in Bach’s Suite III BWV 1068. Although it got off to an uneven start, an exquisite balance of expression and tempo effortlessly overtook the first flaws of looseness in the overture.

The program opened with Antonio Lotti’s Crucifixus à 8, and tears came to my eyes. This choir was outstanding. Superb colouring and a multi-layering of voices in deep minor harmonics was both haunting and eternal.  Finally, in contrast, the robust energy of the entire ensemble showed off its spritely sparkle in Bach’s Magnificat. Everyone left feeling uplifted - that all was right with the world.

Posted by nancy snipper at 3:58 PM