The 27th Edition of the St-Ambroise Montreal FRINGE Festival! 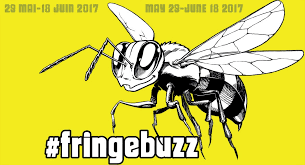 Montreal's MainLine Theatre is pleased to announce this year’s St-Ambroise Montreal FRINGE Festival, The shows run from May 29 to June 18. Take your pick of over 800 performances by more than 500 artists in over 20 intimate venues this June. Celebrate quebecois, national and international artists converging in the Plateau Mont-Royal for a multidisciplinary, French and English festival of theatre, music, dance, visual arts and more!

UNIQUE FRINGE PRINCIPLES
“Straight off the heels of hosting the World FRINGE Congress and becoming a finalist for le Grand Prix du Conseil des arts de Montreal, we’re feeling a surge of new attention,” says Executive & Artistic Director Amy Blackmore. “For many years, the FRINGE movement was one of Montreal’s most exciting secrets. Now Montrealers are embracing the spirit of the FRINGE, inspiring them to jump on board with our values of diversity, community and artistic freedom.”

Montreal’s biggest bilingual indie arts party is jam-packed with three programs:
FRINGE audiences are encouraged to be adventurous, see a show and write their own reviews. Word-of-mouth is king at the festival, as most artists are premiering new works. Follow the conversation using the hashtag #fringebuzz to uncover this year’s mega hits.

New this year: To deepen the connection with community, Montreal Fringe launched the FRINGE MENU with favourite neighbourhood businesses. Lots of restaurants are in on this Fringe binge.

July 11th is International Fringe Day throughout the world, and so along with  Quebec's 35% French language shows and 35% of Quebec English shows, the rest of the pie is divided up: 15 Canadian shows and 15% international ones. I can hardly wait to feast on the amazing variety of Fringe shows! Thanks to Queen Bee herself, Amy Blackmore for leading us into the greatest Fringe hive ever.

INTERSTELLAR ELDER (Directed by Kathleen Greenfield)
A Snafu production
There is no end of skill and remarkable talent to Ingrid Hansen who plays Kit, a chronically frozen woman who for 200 years remains forever sleeping in her cryonic state until she is chosen to enter a space station as a custodian to dust off earth’s issues.  In fact, the planet remains uninhabitable due to a Swiss char take-over which has
obliterated everything. 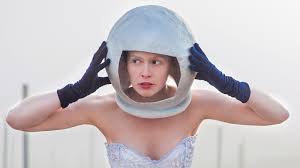 Inspired by her own granny who felt isolated and terribly lonely in a seniors home, this quirky highly imaginative work, displays Kit’s own desperate loneliness. Kit must follow a daily ritual of waking up, peeing, drinking and more, and this Hansen does in fast motion, thereby showing off her amazing movement training. A huge puppet also takes over in this play that comes from a simple tissue and then grows into a humongous alien creature that attempts to kill her. Hansen is a skilled puppeteer, so this segment of the play towards the end was believable, clever and funny and yet scary too.
Audience involvement added yet another surprising element to it all.
The props were so unique and used with great ingenuity. I must say Hansen if a star whose weird scenarios work as metaphors for the human condition. A must-see! Catch her as well in the play The Merkin Sisters whose sibling rivalry comes into the play as they create a huge sculpture.

BERLIN WALTZ (Directed by Devon more)
Devon More Music
The actress has moved to Berlin at a young age after the wall was torn down, and she takes a 100-miles bicycle ride down the path where the wall once was. 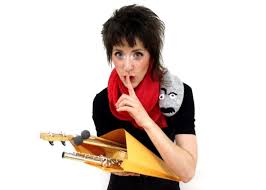 As she does, she charts the history of the wall – the leaders who made Germany a truly divided nation, and how it all ended up. 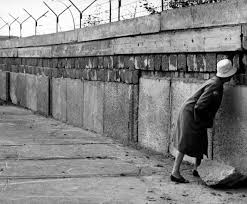 Screen projections and her own live music with wonderful lyrics spiced up the wall saga that concludes that capitalism, not socialism hit the once enclosed inhabitants like a ton of bricks falling down, much as the wall did. She makes a plea for humanity to help one another not exploit one another. What a talented versatile performer actress is! Her voice is her strongest asset. 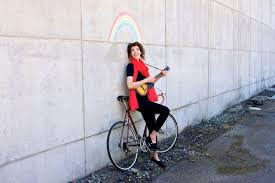 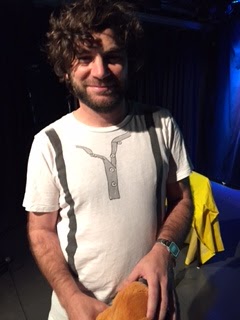 A hilarious game involving the audience answering questions from cue cards read to us by Bennett on the subject of 90s Aussie icon Jason Donovan. We can blow a whistle when we want to stop and do anything we want – like get a beer or go to the toilet, and we can also get Jon to tell us stories which he did in vividly sad and funny ways. It’s us against Donovan. There’s a score keeper from the audience. Usually the audience loses; we just don’t know enough about him. Bennett is charismatic and totally entertaining. What a wacky way to get us to laugh and have a whole lot of fun! 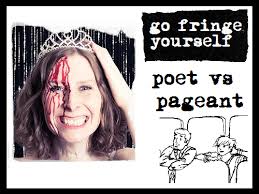 She’s a gawky misfit with a brain big enough to conquer most any smart aleck or bully who comes her way. But Ms. Poole really wants to show off that she can also outbeautify and outbrain the bimboes of beauty pageants, and so she enters one. What is wholly remarkable and incomparably clever about this playwright’s piece is everything she says has been composed in rhyming couplets!
An Aussie actress of memorable talent with a memory to match. How she remembered all those lines of poetry is proof enough that she is indeed a poet laureate, and a lovely one at that! 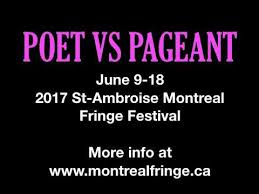 AT THE EDGE OF THE WORLD (Directed by Barbara Newman)


Doctors without Boredom is the name of her solo performance company. What an astoundingly compelling piece this was, and its contents really did happen. Dr Newman is in the most remote tiny village in Haiti. She is trying to deliver a baby whose forehead is obstructing the birth. This is called an obstructed delivery. She ingeniously cuts through cartilage of Martine, the mother, to bring the baby into life. But getting the baby out is preceded with its own human obstructions. Dr. Newman who hails from San Francisco, has worked in Sudan, India and other 3rd world countries as an ER specialist. No doubt she has a mountain of on-the-edge  stories to tell, and she does so on stage with authenticity and suspense. 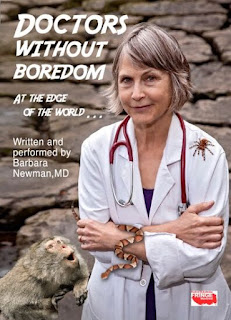 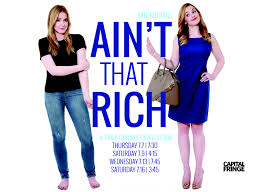 A moving and funny autographical tale about growing up real poor on the Texas Louisiana border. Kate’s mom taught her good values, but the falling roof over their heads and the five jobs Kate holds compels her to seek wealth. One thing leads to another and Kate who loves to talk about money is elated, until she realizes the rich are not so nice. She can’t forget her roots nor her brother who desperately needs her help. He’s an alcoholic bit too long.
The play goes on a bit too long, and the dramatic brother episode sadly tailgates into her riveting message, but by then, we are getting a bit disinterested. Her different characters are excellently acted by this highly talented comedian. The story in itself strips naked the polarity of experiencing wealth juxtaposed to daily poverty struggles.

"The issues and themes in the play are my obsessions and it's all pulled from my life. The thing about working from your life is you have to be really good about checking with the people you write about. The things I'm interested in are the things we're ashamed of, and I think that's what makes good theatre, revealing our deep human truths.

I started performing 15 minute chunks of the piece at Solo Sundays which a a solo performance showcase in San Francisco. I used that performance venue as a way to figure out my overall story. I just started writing towards experiences of growing up broke with a single mom and an older brother, and marrying someone who just had a totally different background. There were so many things that didn't make the final cut, but I'm not sure audiences want to sit through 90 minutes of just me. There is definitely a 90 minute version, but I'm really happy with the emotional movements and beats of the piece in it's current iteration."

Kate is a trained improvisor. She has an MFA in writing from California College of the Arts and is a graduate of UCB improv training.  She said that at every performance she tries try to do something new like improvising a line or finding a new way to say something. If it works, she'll keep it. That's where she's found some of mher favorite moments actually, through improv.

A merkin is the bushy add-on “wig” to the vagina area, and so many innovative hilarious vignettes the two women present are indeed sexual, but the total hair wig that engulphs their bodies - each has her own to wear, which the sibling thespian geniuses play with. No way to describe this one-of-a-kind entertaining show, except to say that these gals are Fringe gold. 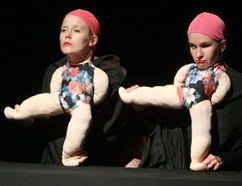 Posted by nancy snipper at 8:45 PM