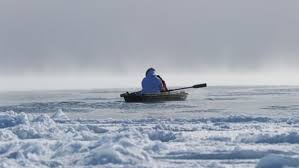 An outstanding documentary and a brave one at that. With the 1983 ban on seal hunting, the EU literally halted any economic prosperity for the Inuit. Subsistence is not enough for these First Nations People. They eat seal, wear seal, protect their bodies in seal skin and fur, but the anti-seal hunting groups refuse to meet with the Inuit to learn about their imperative for seal hunting and how it is done.

Protests in Ottawa and Belgium did not produce the lifting of this ban. The tireless efforts of the filmmaker and the people who are in this film enlighten us viewers. Harpy seal pups are not hunted – just one of the misconceptions animal seal-rights activists have. This is an important documentary that demonstrates  how silly these people are – people who have never even traveled up to the Arctic to find out about a way of life that because of their ignorance, money and celebrity influence, the Inuit way of life and its  very survival is hanging in the air. This film was screened at RIDM.

Posted by nancy snipper at 9:53 PM