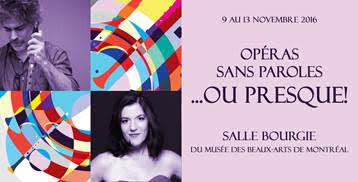 Last night in an Arion Baroque Orchestra concert - cleverly titled, “Operas Without Words --- Or Nearly” (English translation), the audience was treated to the genius of Lorenzo Coppola – a consummate clarinettist whose masterful playing obviously matches his passionate if not comical character. He completely captivated us as he interpreted using highly expressive verbal explanations what the characters were saying in two wordless opera works.  He did this by showing us how the instruments emulated the characters’ dialogues, inner thoughts, whimsical ways, obsession, doubts and anger. Indeed, the music became the characters featured in the program’s opera boufe/comedia dell’arte genre so popular in the mid 18th-century. 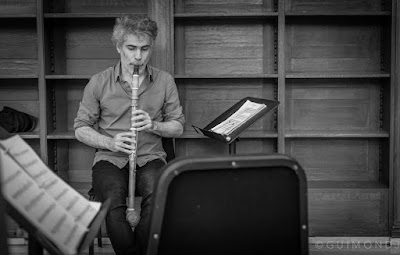 This music that took centre stage last night, and with Mr Coppola as our enthusiastic teacher and a conduit for the characters he conjured – thereby exciting our imagination. Suffice it understate that his showmanship and amazing musicality proved delightfully funny, freewheeling and refreshingly gregarious. He interacted with the orchestra, the soloist and us. No shyness here!

He embodied a theatrical performance and Arion played the game with him, - sometimes purposely having a viola or bass player play a lone long note after a musical phrase was completed. This evoked exclamations of disdain and rebuke from chair violinist, Chantal Rémillard (who did all this in good fun).  She shouted: “Nous sommes en concert!” and “Mais non!” This evoked much laughter from the audience.

Keeping in spirit with this light-hearted music, Mr Coppola informed us that opera boufe avoided the pomp and circumstance of royalty, such as in a coronation or the austere religiosity of the church. Rather, the program’s opera music brought to life the petty concerns and flaws of the mundane – specifically the bourgeoisie living at the time.  These operas often had no words; the music was the words.

Sometimes jumping on and off the stage or creeping along it, even imitating  via gesture, voice and instrument - the feminine against the masculine, we were utterly amused if not more at home with the music we were hearing. After all, it was the orchestra that had to create the scenes of the daily life of these people. As Mr. Coppola said; this was this music was like the cartoons of Bugs Bunny or the cinema music of today – full of surprise, spontaneity and character. It is visual music in essence.

There were two pieces by Mozart that featured words – through the warmth and expressive ease of soprano, Andréanne Brisson Paquin who performed an extract as Lucilla. Once again, Mr. Coppola gave us the back story. The character of Lucilla is from Martin y Soler’s opera Il bubrero di buon cuore and was used for the two arias by Mozart which were performed in Arion’s program. These arias were composed for the soprano Louise Villeneuve for in 1789. Lucilla was a manipulative woman who chose between two men; she wanted the one who had more money. That was the first topic in the first number performed. It was called, “Vado, ma dove?”

In another piece, Mme. Paquin reprised Lucilla, as she sang the air, “Chi sà, chi sà qual sia”. Of course our favourite teacher for the evening pointed out the instruments that emulate her husband who is angry at her for spending so much of his hard earned money, while she demurely appears innocent and wondering if he is jealous of suspicious. Mme. Paquin was enchanting in the role, so much so that we fell in love with Lucilla (despite her silly flaws, including her excessive love of money).  Mme. Paquin is an international multi-award winning soprano. As a singer, she could seduce any angry husband with her utterly pleasing high register and winning stage presence.

In the encore piece, “Parto, parto!” from la Clemence di Titus, both “dueted” – Mr Coppola played his clarinet d’amour which he called a “ridiculous-looking instrument” (it resembles a huge peace pipe) while she sang in harmony to it. Both related to one another in character- clarinet stealing the show too. The scene was beguiling both to the ear and eye. 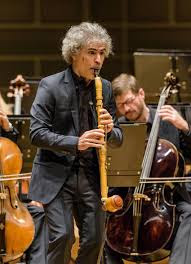 He truly showed off his virtuosity as a clarinettist in Mozart’s Concert for clarinet k.622 in A major. Amazing dynamics were accomplished as he played his clarinet d’amour. His clarity and dexterity was amazing. Here is an artist whose profound emotional breadth matches his technical prowess.
And let us not forget, that throughout the entire concert, there was no conductor there to hold it together. Instead, Mr Coppola decided to take his own seat in the audience and watch the musicians perform – when he was not required to play. After all, as he pointed out, there was no such thing as a conductor until 1820, and this wonderful music was written in the 1700s.

It was a concert of “firsts”. It was the first time this sterling clarinettist had ever performed with Arion, and perhaps the first time Arion performed an entire program without any conductor. Moreover, one must highlight yet another first for the orchestra: it is launching a brand new CD, Bach: Magnificat on the ATMA label. Recorded last summer, the long anticipated CD features the orchestra and five magnificent vocal soloists under the masterful direction of Alexander Weimann. More works are also on this CD, including two sacred masterpieces dedicated to the Virgin Mary. It’s Christmas-relevant for sure. Note that the works were performed during the closing 2015 Bach Festival concert held in Montreal’s Notre-Dame Basilica.

Arion’s next concert will take place on January 12th to the 15. The works of Telemann, Geminani and Bach are featured. Alexander Weimann on harpsichord and Vincent Lauzer on flute will “adorn” Arion’s adored- by-us all orchestra.

Posted by nancy snipper at 7:58 PM