THE EXAM (directed by Peter Bergendy) ** 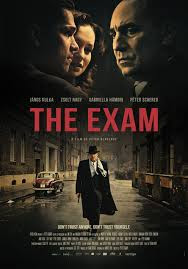 In 1957 a clandestine group of intelligence Hungarian spies are charged with secretly testing  to find out who is counter-revolutionary. Andras, under his friend and boss, Pali ensures he conducts fair and square his own test, but Andras himself is being spied on and tested.

When he falls in love with Eva, the table turns on him and prior to that, his won friend Pali, Eva herself is part of the spy scheme. She is the ultimate test for Andras to prove where his loyalty lies. She’s really a plant with that purpose in mind. The ending is good. (Screened at Hungarian Film Festival in Toronto).

Posted by nancy snipper at 3:41 PM